In Memory of
Joe
Jackson
1919 - 2020
Click above to light a memorial candle.
Memorial Candle Tribute From
Getz Funeral Home
"We are honored to provide this Book of Memories to the family."
View full message >>>
Plant a Tree In Memory of Your Loved One
Click Here
Menu 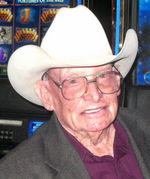 He was born February 10, 1919 in Maxwell, NM to Abraham Jackson and Helen James. His siblings, Hazel, Grace, Jack, Frances precede him in death and is survived by his sister Jackie,. He married Ruth Glansnapp on August 29, 1938. He was Veteran of WWII, retiring in June 1966. He worked as a livestock inspector for 13 years retiring in 1981. He enjoyed fishing, camping, and hunting.
Joe had many interesting stories to tell of his long life. He was a member of First Baptist Church.

He is preceded in death by his wife Ruth of 68 years.