In Memory of
Shirley Carol
Nelson (Morgan)
1936 - 2020
Click above to light a memorial candle.
Memorial Candle Tribute From
Getz Funeral Home
"We are honored to provide this Book of Memories to the family."
View full message >>>
Send Flowers
Menu 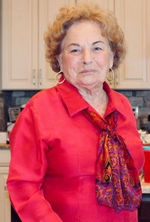 Shirley Carol (Wilson) Nelson, aka Memaw, was a Christmas gift, born at home in Dayton NM. Dayton no longer exists but was a suburb of Artesia NM. Shirley was the oldest of 8 children, 5 brothers and 2 sisters. Being the oldest in a large family, she helped raise her younger siblings. She married the love of her life, Fred Wilson, at age 16 and had the first of her three children at age 17. Shirley was the mother of Fred Jr., Rene and Alyssa. She was the matriarch of a large and diverse family that included her children and their spouses, 5 grandchildren, and 8 great grandchildren. She was loved by all of us.

Memaw had many talents. While living at Conchas Dam in the early part of her marriage, she learned to cook from her elderly southern neighbors. They taught her well as she became an outstanding cook and baker, who could whip together a delicious meal on short notice. We all have tasty memories of wonderful family and holiday meals around her dining room table. No one ever went hungry in Shirley’s home. A talented seamstress, she sewed most of her children’s clothes, and later prom dresses and wedding dressings for many family members. Most importantly a shopper extraordinaire. Shirley loved all things fashion, jewelry, perfume, cosmetics and more. Her daughter Rene has a friend who called Shirley her Jackie O. Several of her grandchildren would sneak into her closet to try on her clothes, the hundreds of pairs of high heels she owned, cosmetics and perfumes. Memaw has always been an extremely social person, making long lasting friends easily. She always had a ready smile and hug.

Memaw worked many years as a cosmetologist doing the latest styles and she was especially busy during prom season since she could do all the fancy prom styles. She also worked at WSMR as a secretary. After retiring, Shirley was busy helping to raise her grandchildren and great grandchildren.

Her first husband, Fred Wilson died suddenly in 1978. She married Stanley Nelson in 1987, who she loved and cared for until his death in 2018. Shirley was also preceded in death by her parents Harold and Florilla Morgan, and her 5 brothers. She is survived by her children Fred Jr. and Allison Wilson, Rene and Paul Coleman, Alyssa and Michael Shinas. Grandchildren and greatgrandchildren Keith Wilson, Brian Candelaria, Tayler, Hailey and Landon Wilson, Kyle Shinas, Heather, Chris and Romeo Lugo, Erin, Dustin, Madelynn and Luke Bierman and Amber, Lawrence and Mason Martinez. Shirley is also survived by her sisters Shera Paul and Sheila Dalton.

A Gathering in honor of Shirley will begin at 1 pm, Monday, August 31, 2020 at Getz Funeral Home, with a Memorial Service to begin at 2 pm.

To send flowers to the family or plant a tree in memory of Shirley Carol Nelson (Morgan), please visit our Heartfelt Sympathies Store.