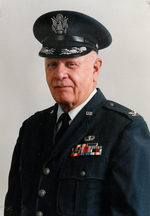 Mr. Bell served as a Paratrooper in the European Theater during World War II. He was awarded three Battle Stars and a Bronze Spearhead for participation in an Airborne Assault. Following the war, he attended NMSU (then known as NM A and MA). He graduated in 1951 with a B.A degree in Psychology and was also commissioned a 2nd Lieutenant in the USAF. He served thirty years on active and reserve duty, retiring as a full Colonel.

He was preceded in death by his wife of over 46 years, Rose Carrion Bell.

He is survived by his son William James Bell, and his wife, Ellen, and numerous nephews and nieces throughout the country.

Services will be held at a later date.

To send flowers to the family of Robert W Bell, please visit our Heartfelt Sympathies Store.