In Memory of
Mary
Goldblatt (Mauro)
1926 - 2021
Click above to light a memorial candle.
Memorial Candle Tribute From
Getz Funeral Home
"We are honored to provide this Book of Memories to the family."
View full message >>>
Send Flowers
Menu 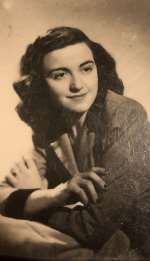 Mary Goldblatt Las Cruces - Our beloved mother, grandmother, and great grandmother Mary (Maria Cira) Goldblatt (née Mauro) 94, passed on to eternal life on February 22, 2021, at her home surrounded by her family. Mary, or “Mama Mary” as she was known to her children’s friends, was born July 21, 1926 in Manhattan, NY to Peter and Biagia Mauro, immigrants from Baucina Sicily. Her life spanned 11 decades. Growing up on the corner of Prince Street and the Bowery in Little Italy, NY, Mary lived with 8 brothers and sisters, her parents and aunt in a 4th floor tenement apartment where every room became a bedroom at night. Dinners seated around the family table, Friday night dances at the church hall, and weekly walks to Sunday Mass were memories she often shared of her youth. She moved to Brooklyn, NY with her family in 1949 and worked as a seamstress for the International Ladies Garment Workers Union (ILGWU) “Look for the Union label” and then as an office assistant at MovieLab where she met her future husband, Robert Goldblatt, and was married for 48 years. After moving to Washington Township, NJ in 1970 Mary’s joy was raising her 5 children. She later became an office assistant and worked in various school cafeterias. She served as Paper Drive Chairwoman for many years at Westwood High School so all 5 of her children could go on a European trip with the band and choir. Because of her dedication to this effort, she was awarded a free trip to Europe, and attended with her youngest child, Brenda. Mary had varied interests including being on a bowling team, fixing plumbing and even taking an auto mechanics class. She loved visiting the library often to read various newspapers and magazines, studying maps, and taking ‘dry runs’ before going somewhere new. In her later years she enjoyed her many Word Search books. Her greatest joy was being with family and often said, “As long as I’m with family, I’m home.” In 2010, at the age of 84, she moved to Las Cruces to be closer to her children. She made her residence at the Mira Vista Villas senior living community where she developed many friendships there and in her Italian Club. Mary is preceded in death by her parents, siblings: “Johnny, Angie, Bebe, Dickie, Savie, Nancy, Lee, and Ro,” husband Robert Goldblatt Sr. and son Robert Goldblatt Jr. Those left to mourn her passing include her daughter Karen Christie, son Greg Goldblatt and wife Bert, daughter Maria Scaglione and husband Eric Stark, daughter Brenda Rivera and husband Christopher, grandchildren Danica and Tyler Scaglione, Nathaniel Goldblatt, and wife Analisa, Hannah and Catherine Goldblatt, great grandchildren Micah James and baby on the way Goldblatt, numerous nieces and nephews, and her dear friend Grace Quiros. A private graveside service took place at St Joseph’s cemetery and a memorial Mass will be arranged at a later date.

To send flowers to the family or plant a tree in memory of Mary Goldblatt (Mauro), please visit our Heartfelt Sympathies Store.