In Memory of
Gertrude Tafoya
Chavez (Tafoya)
1939 - 2019
Click above to light a memorial candle. 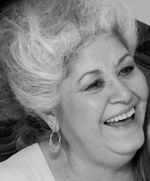 Gertrude was born to Mauricio and Virginia Tafoya on July 20, 1939, in Clayton, New Mexico.
She grew up in a home surrounded by love and probably a bit a chaos, as she was surrounded by 4 brothers and 3 sisters.

Gertrude was a 1957 graduate of Clayton High School, she then moved to Albuquerque, NM where she worked for Presbyterian Hospital and later The Albuquerque Police Dept.

She met the love of her life, Richard M. Chavez in 1957 and they were married February 9, 1963.
She moved to Arlington Texas with her husband and then to Las Cruces when Richard went to work at WSMR. She established her home where she raised her children Rachael and Richard Matthew. As they grew, she took on other duties such as working as a secretary and serving as register for the catechism program at St. Genevieve’s Catholic Church.

She was loving wife and mother and a fabulous cook and manager of the family home.
She was known for her ability to make wonderful tortillas that were known throughout the neighborhood.
One story she told about making tortillas as a young girl was about when her father was home and her mother was working at the time, so she and her father decided to make tortillas for the family dinner. Instead of rolling them out and baking them directly on the Comal, they decided to use the coffee pot lid to make them perfectly round. When her mother returned home, she was surprised to find such perfectly round tortillas. They snickered as they thought they had pulled a fast one.

She eagerly welcomed her son in love Daniel and her daughter in love Sandra into the family and treated them as though they had been a part of it all along.

Gertrude is survived by her husband of 56 yrs. Richard Martin Chavez. Her daughter Rachael (Daniel) and Son Richard Matthew (Sandra), her grandchildren, her sister, Teresa Lavondowski, and her brother Michael Tafoya.

Gertrude was predeceased by her parents Mauricio and Virginia. Her brothers Joe, Jake and Sylvan Tafoya. And her sisters Ann Lucy, and Linda.

She was a member of St. Albert the Great Newman Center in Las Cruces, NM.
Rosary and Funeral will take place on December 14, 2019 at St. Albert the Great Newman Center 2615 S. Solano Dr. Las Cruces, NM. Rosary will begin at 9:00 am and the Mass will begin at 9:30 am. Internment with take place immediately following at Immaculate Heart of Mary Catholic Church

We the family of Gertrude would like to Thank the staff at Sierra Home Health, Palliative Care and Hospice. Especially Tina and Jackie for their love and care of our Momma. We would also like to thank Kim Graham for her care and love as well.