To share your memory on the wall of Derek Ruff, sign in using one of the following options:

Provide comfort for the family of Derek Ruff with a meaningful gesture of sympathy.

Derek lived life to the fullest. He loved the water and the great outdoors. As a child, he loved road trips with his Dad and sister many times each year to visit family in Wyoming. Despite living most of his life in the desert, he was known for his great love of the water. He enjoyed all water sports and camping at the lake. He met his wife, the love of his life, Terri, at Elephant Butte Lake and they were married there at Lion’s Beach on a pontoon boat surrounded by their family and friends in 1989.

Derek loved and supported his alma mater, the New Mexico State Aggies, win or lose, and was known to host a lively tailgate with good food and, always, good beer and spirits. Every year Derek was known for his sumptuous Thanksgiving feast, which drew friends and family alike. No one was allowed in his kitchen as he prepared this delectable meal. He was a dog lover who enjoyed all his pups, especially Ella and Buck, who will miss him dearly, and all their pets who were a big part of their family throughout the years.

Ever the intellectual, Derek, also, had a sense of humor that brought light to so many lives. He graced so many of us with memories that we will hold dear in our hearts forever. His winning personality was contagious, as evident by the many friends he made throughout his life. He never met a stranger, or you weren’t one for long. Gone, but never forgotten, he will live on through everyone who knew and loved him. He was the best man, husband, father, son, brother, uncle and friend we could have asked for.
Derek was preceded in death by his father, Alfred “Dennis” Ruff; both, his paternal and maternal, Grandparents; and a special sister-in-law, Lorraine Reeves.

The family would like to send our gratitude and thankfulness to special friends Don and Becky Reed, Craig Stroing and Susan Moriarty, all of San Diego, CA, who were devoted friends and caretakers of Derek and the family throughout his illness. Their kindness, support, friendship and love were ever present and unfailing. Also, much thanks and gratitude, to the doctors, nurses and staff at Moore’s Cancer Center in San Diego, CA, who cared for Derek over the past year and a half and provided him with the best care possible.

Please consider wearing blue to honor those who are battling, and those we have lost to, colon cancer.

In lieu of flowers, the family suggests a charitable donation in Derek’s name to the American Cancer Society, Moore’s Cancer Center, or a local animal shelter.
Read Less

To plant a memorial tree in honor of Derek Ruff, please visit our Heartfelt Sympathies Store.

There are no events scheduled. You can still show your support by sending flowers directly to the family, or planting a memorial tree in memory of Derek Ruff.
Plant a Tree

We encourage you to share your most beloved memories of Derek here, so that the family and other loved ones can always see it. You can upload cherished photographs, or share your favorite stories, and can even comment on those shared by others.

Posted Jan 31, 2020 at 09:36am
Please accept our most heartfelt sympathies for your loss... Our thoughts are with you and your family during this difficult time. 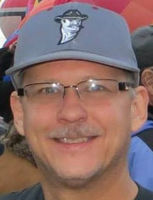