In Memory of
Raymond Jay
Trigg
1940 - 2020
Click above to light a memorial candle.
Memorial Candle Tribute From
Getz Funeral Home
"We are honored to provide this Book of Memories to the family."
View full message >>>
Plant a Tree In Memory of Your Loved One
Click Here
Menu 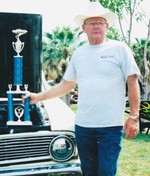 Raymond left this world to meet with Jesus and his Grandson Bryan in heaven on January 23,2020. He was at his home and surrounded by family.

He is preceded in death by his beloved grandson Bryan Charles Miller, as well as his sister Rose VanWey, and his parents Charles and Marie Trigg and his lifelong friend Frank Davis.

Raymond was honorably discharged from the United States Air Force he then moved to Van Horn, Tx. He started working with the Texas Highway Department and was instrumental in the building of Interstate 10 from Kent, Tx to El Paso, Tx. He met Hazel in Van Horn in 1970 and they instantly fell in love and were married on Feb 5th, 1971. They moved to Las Cruces, NM and Raymond started working for the City of Las Cruces. He retired as a Street Engineer and they even named a road after him. He worked hard his whole life, and never asked anyone to do something he was not willing to do his self. Raymond was a car enthusiast his entire life. And him and his best friend Frank Davis raced and built cars. And they definitely got into trouble several times when they were young and out driving the streets of El Paso. His love of cars never went away, he later rebuilt a 1965 Ford Falcon that won several awards. Raymond and Hazel went to many car shows and were dedicated members of the Christian Cruizers Car Club. The club gives food boxes out to many families in need during the holidays and bought jackets for young children who were also in need. Raymond had a giving heart and would help his family, friends and even neighbors without hesitation. He will be missed daily by many.

Memorial Service will be held at Getz Funeral Home, Las Cruces NM on February 24, 2020 at 10 am. Officiant will be Larry Lynch. Please bring your old or rebuild cars and if you have car shirts or button up shirts with cowboy hats feel free to wear them. Also, please bring your favorite story about Raymond to tell.

In lieu of flowers the family asks you to either donate money to the Christian Cruizers car club for a child's jacket or buy a child's jacket in Memory of Raymond Trigg. Please send donations of any kind to Christian Cruizers Car Club in care of Hazel Trigg PO Box 3, Fairacres NM 88033 or call 575 921 2695 for a drop off location. Lunch will be served after the service at 2801 San Elizario Ct, Las Cruces.