In Memory of
Gary Paul
Steele
1938 - 2020
Click above to light a memorial candle.
Memorial Candle Tribute From
Getz Funeral Home
"We are honored to provide this Book of Memories to the family."
View full message >>>
Plant a Tree In Memory of Your Loved One
Click Here
Menu 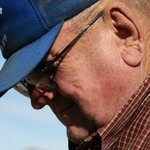 Gary Paul Steele, 82, passed away Thursday, March 5th, 2020. He succumbed to a fast battle with cancer. Gary was born to Paul Steele and Florence Steele on February 20th, 1938 in Holdrege, Nebraska.
Gary was a charter member of the FOE #4308 in Caballo, New Mexico where he helped raise thousands of dollars for various charities in Southern New Mexico. He was very proud and honored to be associated with this organization and their endeavors. He was a member of the Moose Lodge #2050 in T or C and the Elks Lodge #1119 in Las Cruces.
In his earlier years, he served his country in the United States Army. Just after he met his wife “Pat” in Maryland; Gary, determined to live in the desert, brought Pat to Las Cruces, New Mexico. He retired from the Physical Science Laboratory as an Electrical Engineer after 41 years of rockets and weather balloons. As a citizen of Las Cruces; Gary, along with several others, decided to build the only, still standing BMX track in Las Cruces completed in the early 1980s. His son Michael raced bikes for over a decade with Gary supporting him as a pit master, track official, and roadie. Unfortunately, Gary was preceded in death by Michael, who passed in 2016. In addition to the sport of BMX, Gary was an avid boat driver for his family who loved to fish and waterski.
He is survived by his wife, Patricia D. Steele of days from their 53rd wedding anniversary. He is also survived by his daughter Sandra (Sandy) Steele Deerman, grandsons Wyatt Deerman, William Deerman, and Weston Deerman. His older siblings, brother Merlin Steele and sister La Donna Clevenger are survivors, and his oldest sister Arvella Schuman preceded him. He has many loving nieces, nephews, and many friends that he would call family that are mourning his loss on Earth, but rejoicing in their memories of his kindness, generosity, and orneriness.
No services will be held for Mr. Steele, as he was a private man who would come back to haunt his family if they made a big fuss. He will be cremated and placed near his son, Michael, at Hillcrest Memorial Gardens in the near future. In lieu of flowers, please send donations in his name to Mesilla Valley hospice, as this was one of his favorite charities; and it was the place his soul arose from us to our precious Father in Heaven.
Arrangements by Getz Funeral Home, 1410 E. Bowman Ave. Las Cruces, NM 88001. Please visit www.getzcares.com to sign the local online guest book.

Provide comfort for the family by planting a tree in memory of Gary Paul Steele, please visit our Heartfelt Sympathies Store.