In Memory of
Angel
Placencio
1933 - 2020
Click above to light a memorial candle.
Memorial Candle Tribute From
Getz Funeral Home
"We are honored to provide this Book of Memories to the family."
View full message >>>
Send Flowers
Menu 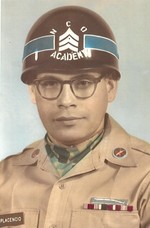 Angel Placencio, 86, a resident of Gila, NM entered eternal rest Saturday, September 5, 2020 at a Veteran’s facility in El Paso, Tx.
Angel was born October 2, 1933 in Gila, NM to Jose Placencio and Maria Dominguez. Angel had many passions in life, he was a two-term commissioner of Grant County. He owned and operated the Riverside Meat Market for many years. He was employed by the United States Postal Service as a Highway Contractor for 30 plus years.
Angel was a Veteran of the Korean Conflict and the Vietnam War, where he earned several medals, including the Purple Heart, Bronze Star, Armed Forces Expeditionary, Korean Defense, Vietnam Service w/4 Bronze stars to name a few. He served 8 years which was cut short due to being wounded in combat. The discipline and patriotism he learned in the Army never left him, as his friends and family will attest.
Angel is survived by a son Andy (Drimalani), grandkids, Jacob, Alexis, and Andrew, son Michael (Grace), grandkids, Ariana, Cedric, and Aeneas. Angel has two brothers, Crespin, Paul, two sisters, Luisa, Nora. He was proceeded in death by his wife Katie, his parents, Jose and Maria, his only daughter Linda Kay, and two brothers, Fidel and Pedro.
Funeral services will be scheduled at a later time. Arrangements will be made by Getz Funeral Home, to send condolences visit, www.Getzcares.com

To send flowers to the family or plant a tree in memory of Angel Placencio, please visit our Heartfelt Sympathies Store.