In Memory of
Thomas Lyle
Olson
1942 - 2020
Click above to light a memorial candle.
Memorial Candle Tribute From
Getz Funeral Home
"We are honored to provide this Book of Memories to the family."
View full message >>>
Send Flowers
Menu 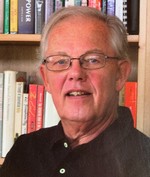 Thomas Lyle Olson passed away in his home in Las Cruces, New Mexico on September 29, 2020 from a very rapid onset of pancreatic cancer. In the days leading up to his death he was surrounded by his loving wife, Elizabeth Lewis Olson, and his daughters from Minneapolis, Erika and Alison. Tom was born July 29, 1942 in Red Wing, Minnesota. He grew up attending Red Wing public schools and ultimately graduated from the University of Wisconsin - River Falls with a degree in History and other Social Sciences. He loved school and felt he was treated as a scholar and a budding intellectual, despite being the "country boy" that he was. As a college student he was given a union job with the Milwaukee Railroad where his dad Lyle was a telegraph operator. He was able to work and go to school and easily pay for his education. This time working alongside hard-working adults at the railroad solidified his belief in the importance of workers’ rights and strong unions.

After college graduation, Tom married his first wife, Joy, and took a teaching position at the University of Nebraska. After his short stint in Nebraska, he landed a full-time teaching job in the History Department at Mankato State University while also earning his masters and PHD. The turmoil of the 1960s and narrowly avoiding being drafted into the Vietnam War made a draft-resister and an ardent anti-war activist out of Tom. He went to work as a staffer for US Senate candidate Earl Craig in 1970 and ended up running himself for US House Representative for the 1st district. Tom and Earl Craig ran side by side trying to further progressive, anti-war policies. His position papers from the time show he was running on a platform of ending the war in Vietnam, lifting people out of poverty, and protecting the environment. Both candidates lost their primaries, Tom by just a few votes.

Tom later spent several years as part of a research team at the University of Minnesota working on various geo-political projects. He loved the work, and his colleagues became his lifelong friends. Much of the end of his time at the U was spent raising money for research projects, which led Tom to an even longer career in fundraising and development for various non-profits in the Twin Cities. During these years Tom had two daughters and many adventures with his wife, Mary Daniels. Highlights included sailing and bike trips with friends, frequent trips to Red Wing to visit his parents Fran and Lyle, waterskiing on Lake Pepin, and hours spent cheering for his daughters on soccer fields and skating rinks.

Tom married Elizabeth Lewis in 2000, and they lived together in Edina. They shared many interests including a love of British race cars, opera, travel, and helping others. In 2008, Tom and Liz moved to a wonderful community in Las Cruces, New Mexico where they built a green home. Tom was a dedicated golfer, volunteer and advocate for the homeless, and valued friend to many in his community.

Retiring from work life in 2005 allowed Tom the time to do what he loved best: researching and writing. He wrote many scholarly articles about Minnesota history. His greatest work was his book "Sheldon's Gift" about the history of theaters and show business in Red Wing, Minnesota, published by the North Star Press of St. Cloud in 2009. Over the past three years, one of Tom's articles has consistently been the number one most read article on Minnesota Legal History Project's website, and his other articles have also been very popular. Thanks to these works, he has made a lasting and important contribution to the written history of Minnesota. At the time of the onset of his illness in early September, he had planned on writing about several more topics of interest and had begun a memoir.

Tom and Liz traveled often (his favorite trip was to Sweden where he and Liz spent time with Liz's relatives) but they had more places they planned to explore together. Tom made frequent trips to Minneapolis to visit his family, especially his grandchildren: Oscar, Jude, Arthur, Miriam, and François. They will very much miss his outings to museums and burger joints, and willingness to be interviewed for school history projects. His friends and family will greatly miss his long stories and political discussions. We are all inspired by his dedication to standing up for the poor and working class, and his strong stance against American imperialism and war.

Tom is preceded in death by his parents, Frances and Lyle Olson. He leaves behind his wife Elizabeth, his cousin Judi Alme (David Alme), his daughters Erika Olson Gross and Alison Olson Cox, their husbands Benjamin Gross and Adam Cox, and his five grandchildren. He also leaves behind countless friends, former colleagues, fellow historians and writers, and opponents in mostly friendly political debate, who, as he had grown fond of saying, "Have the right to be wrong."

Services are pending at this time. The family request that in lieu of flowers contributions be made to Mesilla Valley Hospice in his name.

To send flowers to the family or plant a tree in memory of Thomas Lyle Olson, please visit our Heartfelt Sympathies Store.