In Memory of
Carl Rayburn
Morrison
1928 - 2020
Click above to light a memorial candle.
Memorial Candle Tribute From
Getz Funeral Home
"We are honored to provide this Book of Memories to the family."
View full message >>>
Send Flowers
Menu 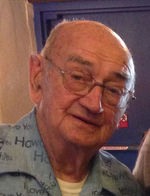 Carl Rayburn (Bud) Morrison passed away peacefully in his sleep on November 9th, 2020 at
The Heritage Assisted Living in Las Cruces. He was a big man and was loved by his family for his big bear hugs, his big handshakes and his big smile. He will be greatly missed by his family and friends.

Carl was born April 22nd, 1928 in Dermott, Arkansas. He graduated from Brinkley High School as the Valedictorian of his class. In 1949 he moved to Las Cruces with his family. There he met the love of his life and future wife, Queene White. They were married on January 21, 1951. At the time of his death they had shared 69 years together.

On February 1, 1951 Carl went into the Army and served during the Korean War. After the war he focused on raising his 3 daughters, serving at his church, and participating in Masonic Lodge, Scottish Rite, Eastern Star, and Hope Assembly #43. He began working at the El Paso Electric Company, where he worked for 30 years.

Carl was an active member of the Mesilla Park Baptist Church – now Real Life Church – from 1949 until his death. He was ordained as a Deacon, and served his beloved church family in many ways, volunteering countless hours of his time, and touching many lives.

As a young man Carl became a member of the Masonic Lodge and remained a very active member until his death. He was Past Master of Aztec Lodge #3 and over the years became a well-known member of various Masonic Lodges in New Mexico and El Paso. He also was a member of Scottish Rite and a Past Worthy Patron of Las Cruces #20 Order of the Eastern Star. Throughout his life Carl treasured all of the friends he had in these organizations. They were very dear to him.

When his daughters joined Hope Assembly #43, he became actively involved as a Rainbow Dad. He spent many years volunteering his time, help, and supervision to this young women’s organization.

Carl was laid to rest at the Las Cruces Masonic Lodge on November 19th, 2020.

The family wishes to thank Trevas Younger and all of the kind and caring staff at The Heritage Assisted Living for their kindness, caring, and cheerful assistance.

It was Carl’s wish that any memorials be made in his name to Real Life Church, Las Cruces, New Mexico.


God gives us each the gift of life,
to cherish from our birth.
He gives us friends and loved ones,
to share our days on Earth.
He watches us with loving care
and takes us by the hand.
He blesses us with countless joys and guides
the lives we’ve planned.
Then, when our work on Earth is done,
He calls us to His side,
to live with Him in happiness,
where peace and love abide.

To send flowers to the family or plant a tree in memory of Carl Rayburn Morrison, please visit our Heartfelt Sympathies Store.