In Memory of
Jane
Zerbey (Meyer)
1926 - 2020
Click above to light a memorial candle.
Memorial Candle Tribute From
Getz Funeral Home
"We are honored to provide this Book of Memories to the family."
View full message >>>
Send Flowers
Menu 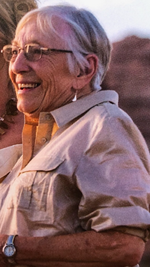 Jane Meyer Zerbey
Las Cruces – Jane Zerbey passed away at her home on November 12th peacefully and surrounded by her family. A funeral mass was held at Immaculate Conception Catholic Church, officiated by Father Bill McCann.

Mrs. Zerbey was born in 1926 in Las Vegas, New Mexico to Charlotte H. and Ben F. Meyer and resided in Las Vegas, Taos, Santa Fe and Albuquerque in her early years. She attended Loretto School in Las Vegas, Loretto Academy in Santa Fe, and graduated from St. Mary’s High School in Albuquerque, where she then attended the University of New Mexico. There she met her husband of 62 years, Benjamin Zerbey.

Soon after marrying, Jane and Ben started a family and began their journey with the National Park Service, where Ben started out as a Ranger at Carlsbad Caverns National Park in New Mexico and concluded his tenure in Salt Lake City, Utah as assistant to the regional director of the Utah District Office of National Parks. They retired in 1981 to Jane’s home state of New Mexico, where her ancestors arrived as early as the 17th century.

She and Ben felt at home in Las Cruces, where they practiced their Catholic faith, actively served the community and explored the surrounding wilderness with friends and family. Jane had a generous heart and a quick wit, endearing her to all those around her and she was a loving and devoted wife, mother, sister, mother-in-law, grandmother, great-grandmother and friend.

Mrs. Zerbey was preceded in death by her husband, Benjamin Joseph Zerbey, her parents Charlotte and Ben Meyer and her sister, Charlene Meyer Smith Shrum. She is survived by her brother, Thomas A. Meyer and his wife Sue; her daughters Sara, Charlotte and her husband Alessandro; her sons Roderic, Mark and his wife Anna, Joseph and his wife Michele and Rafael; eight grandchildren, Gabrielle Laurent and her husband Rob Chapman, Taylor Zerbey, Alexandra Zerbey, Corianne Zerbey, Olivia Zerbey, Nicolas Certini, Zack Zerbey and Viola Zerbey; and two great-grandchildren, Eleanor Jane Chapman and Vander Chapman, as well as numerous nieces, nephews, cousins and friends.

The family wishes to thank Olivia Zerbey and Brynden Williams, Linda Whitford, the caring neighbors of MPHA and Mesilla Valley Hospice, especially Whitney Flores and D'Shawn Cline for their kindness and good care.
In lieu of flowers, memorial donations may be made to Casa de Peregrinos.

To send flowers to the family or plant a tree in memory of Jane Zerbey (Meyer), please visit our Heartfelt Sympathies Store.