In Memory of
Stephen Thomas "Bud"
Richards
1934 - 2021
Click above to light a memorial candle.
Memorial Candle Tribute From
Getz Funeral Home
"We are honored to provide this Book of Memories to the family."
View full message >>>
Send Flowers
Menu 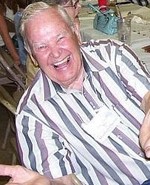 Stephen Thomas “Bud” Richards passed away at home with family on February 8, 2021. Bud was born on October 5, 1934 in Bonne Terre, Missouri to Stephen Thomas “Steve” and Lillian Taylor Richards.
Bud was the second oldest of six children, growing up in the Ozark Mountains of Missouri in the small town of Potosi. Bud excelled at basketball and baseball and following in his father’s footsteps, began his lifelong dedication to community service. His father was elected to the Missouri State Legislature and was a longtime Sheriff of Washington County.
After graduating from Potosi High School, Bud was offered an opportunity to further his education and play basketball at Connors State Agricultural College in Warner, Oklahoma. He was involved in the Student Senate, International Relations Club and Letterman’s Club. Two years later, Bud transferred to Sul Ross State University in Alpine, Texas on basketball and baseball scholarships where he played left field for the 1957 NAIA Baseball Champions. He later coached basketball at Sul Ross and baseball for the Alpine Cowboys Baseball Club for his mentor, Herbert Kokernot.
It was in Alpine that Bud met the love of his life, Jacquelyn McCutcheon, daughter and granddaughter of the McCutcheon ranching family that settled the Davis mountains in the 1880’s. Bud and Jacquelyn married on December 7, 1956 and spent every day together until Jacquelyn’s death in 2007. Their greatest joy was raising their three children, Jane Ann, Stephen, and Carol Jean.
In 1966, Bud left the coaching world and moved his family to Las Cruces to start a Fidelity Union Life insurance agency. Bud and Jacque ran the successful insurance business and were highly active in the community. Bud was a member of the Lions Club, Southern New Mexico Association of Insurance and Financial Advisors, lifetime member of the Million Dollar Round Table, and many other civic organizations. The Aggie Booster Club was a big part of their lives and they had so many dear, wonderful friends in the Mesilla Valley. Bud was committed to our community and state, serving as Chairman of the New Mexico Corrections Commission, Chairman of the New Mexico State Highway Commission and what he may have been most proud of; the initial task force to make the Field of Dreams a reality.
Bud is preceded in death by his wife, Jacquelyn, his parents Stephen Thomas “Steve” Richards and Lillian Taylor Richards, his brothers James Taylor Richards and Robert Huggins Richards, and sister Anne Richards. He is survived by his daughter Jane Ann (David), son Stephen Thomas “Steve” III (Terry), daughter Carol Jean Evans, grandson Christopher Day (Jenny), grandson Michael Day (Kristine) granddaughter Taylor Miller Avelar, granddaughter Alexandra Richards, grandson Stephen Thomas “Tom” Richards IV, grandsons William and Jackson Evans. Five great grandchildren, Scarlett Richards, Emmy Lee Avelar, Blake Day, Carter and Charlotte Day. He was a wonderful Dad and most treasured Granddad. He is also survived by his brother, George Richards, sister Helen Lucy Malugen and loved nieces and nephews. He will be greatly missed by all.

Per his wishes, no services will be held. Bud is pain free and now with his beautiful Jacque and their great family and friends that have passed. Donations can be made to the Jacquelyn McCutcheon Richards Memorial Endowment at the Community Foundation of Southern New Mexico.
Arrangements by Getz Funeral Home, 1410 E. Bowman Ave. Las Cruces, NM 88001. Please visit www.getzcares.com to sign the local online guest book.

To send flowers to the family or plant a tree in memory of Stephen Thomas "Bud" Richards, please visit our Heartfelt Sympathies Store.