In Memory of
Oliver Thomas
Eason
1937 - 2021
Click above to light a memorial candle.
Memorial Candle Tribute From
Getz Funeral Home
"We are honored to provide this Book of Memories to the family."
View full message >>>
Send Flowers
Menu 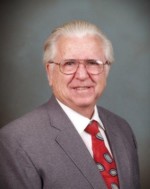 As Ecclesiastes 7:1 says, “A good name is better than precious ointment; and the day of death than the day of one's birth.”

Thomas, or Tom, as he was known to many, was a lifelong (and sometimes mischievous) country boy with a gentle love, a ready laugh, and an unwavering faith in his Lord Jesus. As you are sure to notice, he went by many good names— each with its own layer of stories and emotion for those who called him by it.

His earliest name was Oliver Thomas. “O.T.,” was born in a simple farmhouse in Goodwater Alabama on December 18, 1937, to Avinell and Andrew Thomas Eason, who both preceded him in death. Comfortably at home among the dawdling sway of longleaf pines and the heartening sounds of nature, O.T. was surprised but obedient when he felt God call him to leave the family farm to prepare for Christian ministry at age 16.

O.T. scrimped and saved his earnings from hot days working in a cotton mill until he had enough money to start college at Samford University in Birmingham, AL. He graduated from there in 1960 and began his ministerial studies at Southwestern Baptist Theological Seminary the following year.

But he took on two very important new names during his college years: “Sweetheart” and “Daddy.” The country boy fell in love with a city girl — a pretty young nursing student from Birmingham, AL named Betty W. Smith— who was determined to marry a man of faith and keep them both ready to follow God’s call to love far-off people with the good news of Jesus.

The two married on August 8, 1958 and welcomed baby David Eason in 1960, followed by Lynn Eason (married name Cuellar), Deborah Eason (married name Cuellar), and Timothy Eason. To these four, and to their future spouses, he was “Daddy,” a steadfast voice of wisdom through their varied journeys. His children will carry on his passion for seeing people thrive in faith and love, and they will always think of him when they encounter classic cars, or great deals, two other things that put a sparkle in his eyes. To his eleven grandchildren he became “Grandpa” or “Papa,” monikers that will always recall to them his legacy of faith, some rambunctious country phrases, endless Planter’s peanuts, and outdoor adventures near the Mountain House in Timberon, NM.

But we cannot skip over some of his other important names! During his nearly 60 years of ministry, he was often known as Thomas or Tom. After pastoring at several churches in Alabama, Betty and Thomas answered the call to Language Missions and attended Language School in San Antonio Instituto Biblico. After Language School, they felt called to the desert and mountains of Tucumcari, New Mexico. While pastoring the Primera Iglesia Bautista in Tucumcari, Thomas and Betty (who had both learned Spanish by this time) answered the call to move their young family to Puerto Rico, serving as missionaries there for four years through the Home Mission Board (now North American Mission Board) of the Southern Baptist Convention. While there he assisted in both starting the first Southern Baptist Sunday School in the Virgin Islands, and in organizing the Puerto Rico Baptist Theological Seminary, where he also taught during the entire time he served in Puerto Rico. Thomas also served as Evangelism Director and director of radio and television ministries for the island.

Thomas’s love for Spanish speaking people, and the deserts of NM, led him to serve as a catalytic missionary and church planter and supporter throughout Southern New Mexico. But Las Cruces was his home. And here in Las Cruces, he is “Hermano Eason,” a true brother of 45 years (ten of those as a retired volunteer). Though he officially retired in 2011, Hermano Eason loved, counseled, and championed local pastors and church bodies through his final days on this earth.

As the Proverb above reminds us, Thomas’s good names continue to serve as precious ointment to those he precedes in death— which we trust holds even sweeter adventures for him than his birth here on earth did. He is preceded into eternity by his mother Avinelle, his father Thomas, and his brother Alonza, all three of Goodwater, AL.

A public viewing will take place Thursday March 25, from 9:30-10:30 am at Real Life Church in Las Cruces, NM, followed by a service at 10:30 am. COVID-19 safety practices will be in place, and masks will be required. For those who would like to join the service from home, a livestream link will be made available on the church’s website. A family-only graveside service will follow at Hillcrest Memorial Gardens. In lieu of flowers the family is asking that donations be made to the Rio Grande Baptist association, (1313 E. University Ave., Las Cruces, New Mexico 88001) to be used for the language missions work he so loved in our state.

To send flowers to the family or plant a tree in memory of Oliver Thomas Eason, please visit our Heartfelt Sympathies Store.