In Memory of
David
Grijalva
1963 - 2021
Click above to light a memorial candle.
Memorial Candle Tribute From
Getz Funeral Home
"We are honored to provide this Book of Memories to the family."
View full message >>>
Send Flowers
Menu 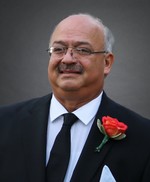 It is with heavy hearts that we announce the passing of David Daniel Grijalva on Friday March 26, 2021. He was the youngest born to Miguel Angel Grijalva and Priscilla Oliver Grijalva on February 4, 1963. David was a member of Immaculate Heart of Mary Cathedral for many years. He attended IHM Catholic School from elementary through middle school. While in high school, David began working under his father in the family businesses, Las Cruces Foods Inc. and La Cocina/Primo Foods Inc. David graduated from Las Cruces High School in 1981. After high school David continued to work for the family business and he also became a member of The Town of Mesilla Fire Department in 1983. After a brief break, David rejoined the department in 1985 and remained a member up to 1995. During his time with the fire department David became a Lieutenant and later was voted in as Captain, even though he was not even running. In 1997 David was made an Honorary Member for his dedication to The Mesilla Fire Department. After leaving the fire department, David continued in the family business and became Corporate President in 1994. In 2018 David, with great sorrow and a little reluctance, decided to leave the business in the care of his family members so he could focus on his health.
David is proceeded in death by his father Miguel Angel Grijalva and his mother Priscilla Oliver Grijalva; his mother-in-law Josefina Garcia; and his son-in-law Michael Ray Gonzales. David is survived by his loving wife of 37 years Rosalia Torres Grijalva and his children; Davina and Josh Castillo, Danielle Grijalva and Anthony Holguin, Alicia Grijalva and Alexis Silva, Iris Grijalva and Alfonso Grimes, and Venice Grijalva; his grandchildren Michael (Angel) Gonzales, Jordyn Castillo, Embry Gonzales, and Peyton Castillo; his siblings Michael (Mikie) Grijalva, Nancy Donohue and Gerard (Jerry), Gloria Segura and Ron, Lillian Grijalva and Bill Craig. David is also survived by numerous cousins, nieces, nephews, grandnieces and grandnephews which he loved dearly.
David’s beautiful life will forever be cherished in the lives of his family and friends. He was a loving husband and a devoted father. David was very much adored and cared for by his family in health and in illness. David had a fun playful side, often cracking wise and playing jokes, especially on his children and grandchildren. He had a passion for music. He always played his guitar and sang with his daughters. He also loved to fish and star gaze. David was a man filled with love, wisdom, integrity and compassion. He always stressed and instilled the importance of family in his daughters. He taught all his beloved girls valuable lessons in this life that they will forever hold dear to their hearts. David will be dearly missed by many, but his strong spirit and love will live on through those that knew him.
Services will be held Thursday April 8, 2021 at Holy Cross Retreat Center, with the recitation of the Holy Rosary beginning at 10:30am and services starting at 11:00am.
Arrangements by Getz Funeral Home 1410 E. Bowman Ave. Las Cruces, NM. Please visit www.getzcares.com to sign the local online guest book and for livestreaming.

To send flowers to the family or plant a tree in memory of David Grijalva, please visit our Heartfelt Sympathies Store.