In Memory of
Felipe Armando
Medina
1931 - 2021
Click above to light a memorial candle.
Memorial Candle Tribute From
Getz Funeral Home
"We are honored to provide this Book of Memories to the family."
View full message >>>
Send Flowers
Menu 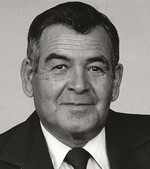 Felipe A. Medina
Felipe Medina, 89, of Las Cruces, passed away on Monday, April 5, 2021 surrounded by his 5 living children. Felipe was born on June16,1931 to Felipe and Fidelia Medina in Questa, New Mexico as the fourth of eleven children. He was raised in Questa, graduated from Costilla High School and received his bachelor’s degree in biology from St. Michael’s College in Santa Fe. Felipe began working for the State of New Mexico’s Department of Health where he met Anita Castillo who was working as a school nurse. He and Anita married in 1956, raised six children and celebrated 60-plus years of marriage until her passing in 2017. In 1960, Felipe began his career as a cattle rancher in Northern New Mexico, with operations in Black Lake and Taos. In 1981, he and Anita traded in life on the ranch for life on a pecan farm in Mesilla, New Mexico. Felipe was a devout Catholic his entire life, starting as an altar boy and choir member at St Anthony’s Parish in Questa and concluding as a lector at San Albino Parish in Mesilla. Felipe had many interests including woodworking and golf but was most renowned for making his red and green chile from his own recipe.
Felipe is survived by his children, Frank Medina and wife Laurie (Phoenix, AZ), Anthony Medina and wife Leslie (Flagstaff, AZ), Roberta Lawson and husband Allen (Gilbert, AZ), John Medina and wife Kathy (Las Cruces), Marta Bauman and husband Aaron (Rio Rancho), grandchildren Sonya Velonis, Michael Medina, Felipe Medina, Catherine Medina, Ryan Musselman, Dan Medina, Amanda Butcher, Andrew Medina, Marc Medina, Diana Lawson, Ashley Fitzpatrick, Eric Lawson, Caitlin Fitzpatrick and Braeden Bauman and seven great-grandchildren. He is also survived by sisters Evangeline Rael, Lorraine Cook, Glorianna Schneckloth, Pat Rael and Carol Williams and brothers Manuel Medina and Felix Medina.
Felipe was also preceded in death by his grandson Matthew in 1994 and son Marcos in 2000.
A rosary will be held at 11:00 am on Friday, April 23, 2021 at the Basilica of San Albino Catholic Church, immediately followed by a Funeral Mass at 11:30 a.m. with burial at Hillcrest Memorial Gardens Cemetery. Due to COVID 19 restrictions, attendance at the rosary and Mass will be limited to 90 attendees (masks are mandatory) and no attendees will be allowed at the graveside service. For those unable to attend, the rosary and funeral Mass will be live streamed at: https://facebook.com/basilica.albino/.
In lieu of flowers, memorial contributions may be made to Casa de Peregrinos Emergency Food Program in Las Cruces, NM.
Arrangements by Getz Funeral Home, 1410 E. Bowman Ave. Las Cruces, NM 88001. Please visit www.getzcares.com to sign the local online guest book.

To send flowers to the family or plant a tree in memory of Felipe Armando Medina, please visit our Heartfelt Sympathies Store.