In Memory of
June Deon
Hank
1929 - 2021
Click above to light a memorial candle.
Memorial Candle Tribute From
Getz Funeral Home
"We are honored to provide this Book of Memories to the family."
View full message >>>
Send Flowers
Menu 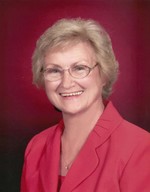 June Deon Hank of Las Cruces NM passed away on Monday, April 12, 2021 at Memorial Medical Center. She was born on December 2, 1929 in Breckenridge MO. to Homer Lee and Flora E. James. She is survived by her son Gordon E. Hank III of Las Cruces and her sister Mary Jane Walz of Mountain Home, Arkansas. Other survivors include nieces and nephews as well as many close friends. June was preceded in death by her parents, her husband of 47 years Gordon E. Hank Jr. who died in 2000 and her brother Lee Edwin James.
June graduated in 1947 from Mooresville High School in Mooresville, MO and attended the prestigious Chillicothe Business College. She went to work at Citizens Bank in Chillicothe, MO. On June 14, 1952, June married the love of her life Gordon E. Hank Jr. They were married at Fort Benning, Georgia, where “HANK,” as June called him, was stationed in the U. S. Army. Soon after, Hank was sent to Germany. June returned home to Chillicothe and gave birth to her only child, Gordon E. Hank III. Hank returned home and went to work for the Missouri State Highway Department for 10 years. Meanwhile, June worked at the local shoe store Engelman’s. In 1959 they built their own home with help from her Dad.
In 1963, Hank took a job with the New Mexico State Highway Department and the family moved to Tucumcari, NM. This was a traumatic change for June coming from the plush greenery of Missouri to the dry barren desert of New Mexico.
The family moved to Las Cruces in 1965 where June grew to love the city and the southwest—NO SNOW! Still for the next 33 years the family drove back to Missouri at Christmas time to see the folks and family.
Arriving in Las Cruces, June went to work at NMSU in the Admissions Office. She continued working there for 30+ years, retiring in September 1996. She was an avid Aggie basketball and football fan, holding season tickets for over 50 years. June rarely missed a game!
June was very active in numerous activities. She and Hank loved to dance and travel and were members of both the Circle Eight Square Dance Club and the Three Crosses Travelers RV Club. She was in Red Hats, ESA sorority and for a time painted China. And yes, she was a SHOPPER. She knew where all the best deals were and shopped until she dropped.
June liked to create a fun atmosphere. She provided and arranged the decorations for dances and RV functions as well as setting up games for everyone to enjoy. She enjoyed the companionship of all her friends, visiting, going out to eat and playing cards with her monthly group.
Sadly, Hank died in 2000, June was determined to continue all her activities. She drove her 32’ RV all the way to Niagara Falls, NY and back. She made another adventure to Wyoming and continued monthly RV trips with the Three Crosses Travelers RV Club in New Mexico and the Southwest. June continued Square Dancing and attended many National and State events. She attended St. Paul’s Methodist Church services regularly and loved her Sunday School class.
It was June’s wish that there be no formal funeral service. She will be laid to rest next to her husband, Hank, at Hillcrest Memorial Garden Cemetery.
Arrangements are with Getz Funeral Home, Las Cruces, NM. Please visit www.getzcares.com to sign the local online guest book.

To send flowers to the family or plant a tree in memory of June Deon Hank, please visit our Heartfelt Sympathies Store.