To share your memory on the wall of Jo Massie-Seiple, sign in using one of the following options:

Print
Jo Ann (Adams) Massie Seiple was born in Marshall, Texas on May 23, 1942. She passed away on April 27, 2021, in Las Cruces, New Mexico. The cause of death was complications from Alzheimer’s Disease.

Jo Ann was the second daughter bor... Read More
Jo Ann (Adams) Massie Seiple was born in Marshall, Texas on May 23, 1942. She passed away on April 27, 2021, in Las Cruces, New Mexico. The cause of death was complications from Alzheimer’s Disease.

Jo Ann was the second daughter born to Charles Joseph Adams and Virginia Adams Daniel. She was a graduate of Marshall High School (class of 1960). She was preceded in death by her husband, David Gerald (Jerry) Seiple, in 2014.

She attended what was then East Texas State College, graduating with a B.A. in Journalism. After graduation, she returned to Marshall High and taught English to the class of 1966. She then married Wayne Massie of Dallas Texas, and they moved to California shortly after. They were married for several years before divorcing, but she chose to stay in California and taught English and Creative Writing to students at Chula Vista High School. There, she was voted Teacher of the Year in 1971, 72, 73, and 74.

In 1975, Jo Ann decided to return to East Texas State University, where she received her Master’s and Doctoral degrees in Education. It was there she met a fellow graduate student and her soulmate, Jerry Seiple. Jerry was a decorated veteran of the Vietnam War, and they married and started their long and wonderful lives together.

She and Jerry taught classes at Indiana University, Richmond, for a year. In 1979 Jo Ann was hired as an associate professor at the University of North Carolina Wilmington. In her time at UNCW, she served as Chair of the English Department, Assistant Dean of the College of Arts and Sciences, and in 1996 became the Dean of the College of Arts and Sciences. During her tenure as Dean, ending in 2004, she established five new departments, including Creative Writing, Film Studies, Computer Science, Environmental Studies, and Social Work. She developed the Departments of Music and Art and Theater following the division of the Department of Fine Arts. In addition, she created a community outreach program, a magazine, recruited nine new department chairs, and increased the involvement of women and minorities. Jo Ann was known as a fair and supportive Dean who served as a mentor to many young faculty members and was widely respected for her hard work and inclusive demeanor.

Jo Ann received many honors during her career, including an MLE Fellow from Harvard University in 1998; was an invited participant at the ACE National Forum for Women Leaders in Higher Education, Washington, DC in 1998; and a nominee for the YWCA Women of Achievement in Education in 2004.

After her retirement as Dean, she briefly returned to the classroom, but soon fully retired and spent many years traveling the world with Jerry. She also made frequent trips back to California and Texas to visit with her family. She and Jerry had a wide network of friends in Wilmington and shared their love of fun, dogs, and, of course, Texas barbecue!

Jo Ann was also well-known for her sense of humor, her history of comedic performances, hosting epic parties, and annual Christmas cookie bake for her friends and neighbors. She was a good and decent human being, acting as a mentor to countless folks in her life. She had a positive impact on so many faculty and students throughout her career, and had the honor of living a fruitful and meaningful life. She will be deeply missed.

Special thanks to caregivers Tammy Reilly of Wilmington, North Carolina; Mojgan Karimi-Moghaddam of Las Cruces, New Mexico; and to the fabulous staff of The Heritage Assisted Living in Las Cruces.

No services are planned. Donations may be made to the UNCW College of Arts and Sciences in her memory, or to a charity of your choice.
Read Less

There are no events scheduled. You can still show your support by sending flowers directly to the family, or planting a memorial tree in memory of Jo Ann Massie-Seiple (Adams).
Plant a Tree

We encourage you to share your most beloved memories of Jo here, so that the family and other loved ones can always see it. You can upload cherished photographs, or share your favorite stories, and can even comment on those shared by others.

Posted May 07, 2021 at 11:51am
JoAnn was the best Dean of the College of Arts during the 20 years I was a faculty at UNCW. Her sense of fairness and humor were wonderful!

3 trees were planted in the memory of Jo Massie-Seiple

Posted May 22, 2021 at 05:08pm
JoAnn chaired the search committee that brought me to UNCW in 1983. I found her always supportive in her work with others, a most outstanding colleague in my years in higher education, and always collegial. Her presence aided our campus in being humane, caring, and student-centered in all of her different leadership roles. Her legacy will be ever-present on campus for years to come.
Comment Share
Share via:
KD

Posted May 18, 2021 at 03:44pm
When I was in her creative writing class at Chula Vista High School, she thought enough of whatever talent I had to have private discussions about my writing after school. The last time I communicated with her was in 2012 when I was in China and we exchanged emails...about Lord Byron. Forty years on and we were still discussing literature.
Comment Share
Share via:
JW

Posted May 17, 2021 at 09:58pm
I’m so sorry to hear of Jo Ann’s passing. She touched my life in ways nobody else ever could have… embedding the love of reading and poetry in my heart and soul in 10th grade English class. I’ve written well over 2,000 poems in my lifetime, and she’s the one to blame. She was one of my very favorite teachers!! I was so happy to find her again at the CVHS Class of 72 40th reunion when I attended as a friend’s “date”. I made sure to let her know what an impact she had on my life. May she Rest In Peace and all God’s glory. ❤️💔🙏🏻 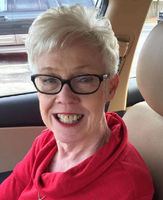